Aaron Tveit returns until April! One of the most beloved movies of the 21st century, Moulin Rouge 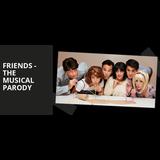