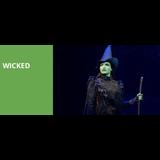 Winner of 6 Tony Awards
Broadway´s third longest-running show is a thrilling reinvention of the Disney classic. Brought to life by director Julie Taylor, The Lion King on Broadway is an exuberant mix of the songs from the movie,...