new EELS tracks that may or may not inspire, rock, or not rock you. The world is going nuts. But if
... Hi,
We could do the usual record company "bio" about this new record, but, seriously...who... settles, everything is out of control, etc. But it offers this: you can make changes. Thus, you can change... . Good things will grow out of that. There are some songs along those lines here as well.
I’ve been Mickey Pettit: Everything I Need to Know I Learned From Ethel Merman

commanding voice, Mickey learned about life, love, and letting go. This cabaret will feature some of Ethel 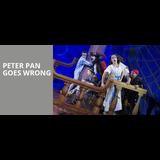